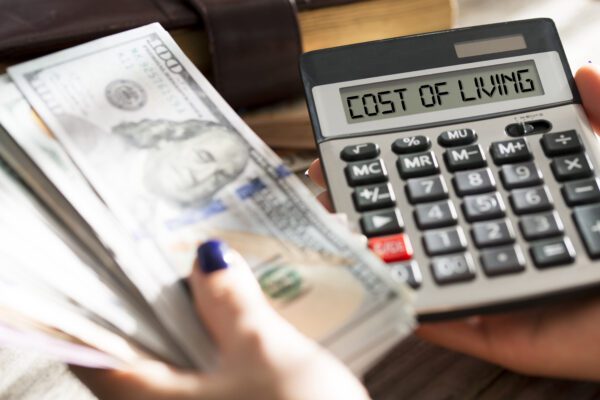 Airdrie, Alberta is a growing city in Canada. The place is home to nearly 70,000 people and is only about 25 minutes north of Calgary, Alberta’s largest city. As interest in this community is increasing, you may be wondering what the cost of living in Airdrie is like. Is Airdrie a place you can afford to live comfortably?

Well, in today’s article we’ll be talking about this very subject. So, let’s have a look at Airdrie’s cost of living!

Alberta typically has some of the lowest gas prices in Canada. This is thanks to the oil industry which allows for lower provincial prices on fuel. In Airdrie, costs for gas are usually slightly higher than the prices in Calgary, if not the same. Currently, gas currently hovers around $1.10/L in Airdrie. Although gas prices fluctuate over time, they aren’t particularly crazy in Airdrie.

When it comes to buying gas in Airdrie, there are plenty of options to explore. Be sure to check out various local gas stations to find the best prices.

The cost of groceries is another important aspect of the cost of living in Airdrie. One can usually see how much they spend on groceries by adding the amount to their receipts after their purchase. For the most part, groceries in Airdrie are on-par with the rest of Canada. Household groceries typically reflect the national average of $214 per person.

If the price of groceries is one of your biggest expenditures, you may be relieved to hear that Airdrie offers competitive prices in comparison to similar cities.

Generally speaking, Albertan utility prices fall in the middle of the pack when compared to other provinces in Canada. Airdrie can be slightly more expensive than the provincial average in certain areas. For example, Airdrie’s drinking water is transported from the city of Calgary, which involves more costs. Overall though, paying for most utilities in Airdrie will be similar to the rest of Alberta.

Here’s a quick rundown of some costs you can expect to pay for utilities in the area:

The average electrical bill in Alberta is roughly $167/month, which is on par with the rest of the Canadian average. A province like Quebec may have cheaper electrical costs, but other places like the Northwest Territories can be much more expensive for electrical utilities.

Depending on your usage, living in Airdrie will likely result in a monthly bill of around $110/month for your water, sewage, and garbage needs. Of course, if you are living alone in a tiny apartment with one bathroom, this would be expected to cost less.

In regards to the cost of living in Airdrie, taxes are a big part of the discussion. Alberta income tax is unique in the sense that the lowest tax bracket is $131,000, and within that bracket, only 10% goes to provincial tax.

Finding quality childcare is important for many families, and Airdrie is no exception. In fact, as a growing community with many young families, the need for quality childcare services is even more important. These kinds of services can cost just over $1000/month in Airdrie, so it’s key to know your budget.

In Alberta, there are 61 school boards from district to provincial. There are many options for education in Airdrie, from public and private schools to homeschooling opportunities. Public schools are free, like in other parts of Canada, and are controlled by the provincial government. The cost of private schooling varies depending on the institution you choose, so you can do some research to learn about the various options available to you in Airdrie.

As of 2020, the average house sale price in Airdrie was $384, 412. This is slightly cheaper than Calgary and is an indicator of Airdrie’s cheaper cost of living. Renting is similarly inexpensive in the city. For example, the average cost of a one-bedroom apartment in Airdrie is $1,088. This is $74 cheaper than the same type of apartment in Calgary. Both cities are known for very affordable rent, so it is unsurprising that the cost of living in Airdrie balances out to be fairly similar to Calgary’s.

The majority of households in Airdrie bring in more than the national median household income, which is roughly $109,992 per year. This is especially useful in the context of Airdrie’s cost of living where household income matters more than anything else. Professional jobs in Airdrie generally earn higher salaries than their equivalents in other parts of Alberta, which affects the cost of living for each individual in different ways.

Most Airdrie residents are above the low-income cutoff, but those who don’t have access to many services that provide assistance with the cost of living. The Airdrie Food Bank is a helping hand for anyone struggling to make ends meet. There is a range of employment opportunities in construction, transportation, and warehouse work as well as the oil and gas industries nearby. So, people with all kinds of resumes can find reliable employment in Airdrie.

Can You Afford Living in Airdrie?

When considering moving to Airdrie, it is crucial that you research the cost of living in the area. Making sure that you can afford to live in Airdrie beforehand is the best way to ensure that your move goes smoothly.

If you’re moving to Airdrie and are in need of some assistance, contact Sparta Movers!