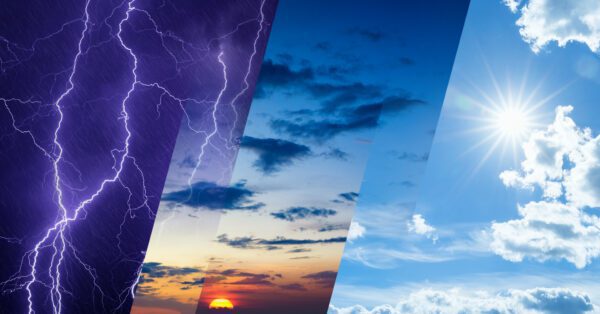 Calgary sits in the foothills of Alberta’s Rocky Mountains, about 80 km east of the British Columbia border. Home to 1.3 million people, it is the largest city in Alberta and the third-largest municipality in Canada. One of the most asked questions for newcomers to the city is, “What’s the weather like?”. Partly to answer that question and partly because many people are interested in how Calgary’s climate is different from their own, here is a short guide on Calgary’s climate.

As a city in a mountainous region, Calgary has a wide variety of weather. It is one of the sunniest cities in Canada, with 2,405 hours and 333 days of sunshine annually. It is also one of Canada’s snowiest cities, receiving about 128.8 cm of snow over the duration of the year. Calgary’s weather is typically warmer in the summer and colder in the winter, with a great deal of variance between day and nighttime temperatures.

Generally speaking, Calgary’s climate is semi-arid. The city experiences distinct seasons, but the temperatures are relatively mild compared to other parts of Canada. That’s not to say that winters or summers in Calgary aren’t chilly – it just means that they’re slightly less cold than other Canadian cities.

Calgary’s four seasons are typically broken into the following:

It is important to note that Calgary does not have extremely long or short seasons compared to other parts of Canada. Furthermore, Calgary’s seasons are not particularly extreme, meaning that the weather is not extremely cold or hot for extended periods of time.

During the spring, Calgary’s climate is often nice and pleasant. The temperatures aren’t too high or low, and the humidity is never irritatingly high like other parts of the country at this time. The average temperature can range from 29°C in March, to a moderate 6°C in May. Whether you’re moving to Calgary or visiting, spring is a great time to breathe in some fresh mountain air and enjoy the bright blue skies.

What to wear: Light jackets, sweaters, and t-shirts are all appropriate during this time. A waterproof outer layer is also recommended, as Calgary can still see some rain during this time of year.

When summer hits Calgary, everyone’s thoughts turn to what it’ll be like outside. The weather is warm and there’s a lot of daylight hours so going outdoors feels great. Summer average highs stay in the mid 20°C, while summer average lows remain around 11°C. You can expect an average of six hours of sunshine a day during the summer months. If you want to experience Calgary and the surrounding area at its best, summer is the time to do it.

What to wear: Summer in Calgary involves the usual summer essentials – light clothing, sunscreen and sunglasses. If you’re planning on spending some time outdoors make sure to dress for it and expect to get slightly hot.

Fall or Autumn Weather in Calgary

Just like spring, autumn has a distinct feel and is beautiful in Calgary. The leaves change colour and there are fewer hours of daylight – which means winter isn’t too far away! Fall temperatures can range from 18°C to 3°C from September to November. Overall, this time of year is also quite pleasant in Calgary and is perfect for some outdoor activities!

What to wear: As the city begins to cool down, you’ll want to start wearing long sleeves. However, don’t bring out your winter gear just yet! A light jacket will be all you need during the day while the evenings will require sweaters or a coat.

While winter in Canada can be rough, Calgary is often spared the harshest weather. The city can get cold at times, but it’s far from being considered a true cold-weather city. In general, temperatures will hover around 0°C during the day and -10°C during the night. Mild winds known as chinooks can make the weather feel warmer throughout the winter. Additionally, Calgary gets a decent amount of annual snowfall, but most of it is light and fluffy – perfect for making a snowman or skiing down the slopes.

What to wear: A winter wardrobe in Calgary should consist of a few layers. Jackets and boots are a must, but Calgary has its fair share of colder days so don’t forget gloves and a scarf. You might also want to consider bringing along some thermal wear or leggings if you plan on spending lots of time outside.

While there isn’t an objective best time to visit Calgary, there are times that are better for certain activities.

For example, if you want to hike in the Rocky Mountains, you should visit in late spring when trails are still accessible from June – September. If you want to partake in large festivals and events like the famous Calgary Stampede, the summer months are the best time to visit. If you want to experience Calgary’s endless opportunities for winter recreation, late fall through early spring is your best bet.

The best time to travel to Calgary all depends on what you want to do.

To put it simply, Calgary is a lovely city to be in year-round. There are all kinds of activities to partake in during each season, and the weather is generally pleasant for a lot of the year. The weather in Calgary is a major part of city life, and everyone has an opinion on it. Calgary’s climate is variable from season to season.

With a little knowledge about Calgary’s climate and weather, you can plan your activities accordingly and enjoy Calgary’s nice weather all year round.

Regardless of what time of year you experience Calgary, it’s likely you’ll find something to love about it. Do you plan to relocate to Calgary soon? Sparta Movers would love to help you with your move! Call us at 403-402-7992 or click here to receive a free moving quote from us!