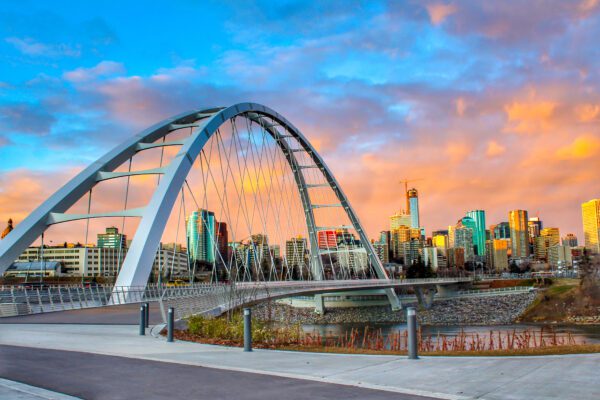 Edmonton, Alberta is one of Canada’s biggest cities, with a population of roughly 1 million. The place is home to people of all kinds of backgrounds, as it has something for just about everyone. But, is living in Edmonton right for you?

If you’re living in Edmonton, there’s a pretty good chance that you’ve already made the decision. But, if you’re considering moving here, this article will give you a good sense of what living in Edmonton entails.

Cost of Living in Edmonton

One of the best things about living in Edmonton is the affordable cost of living. Compared to other major Canadian cities, living and enjoying a good quality of life doesn’t require as much money here. For example, if you’re looking for an apartment or home, the average prices are lower than in places like Toronto and Vancouver. Furthermore, renting is typically around $1,000 per month for a one-bedroom apartment, which is actually slightly lower than Calgary.

For those looking for a place to live without breaking the bank, living in Edmonton is the obvious choice. While major Canadian cities generally aren’t cheap, living here is definitely more doable than living in some other places. It’s always nice living in a city where you can more easily save so that you can make plans for the future.

Another reason living in Edmonton may be right for you is the availability of work. While the city is known for its prevalence in the oil industry, there are many other work opportunities for those living in Edmonton. Industries like the tech industry have taken off in recent years, making the city a great place for young professionals to settle down. Having many opportunities available can be a deciding factor when living in Edmonton, so consider what kind of work you want to do. Many of the province’s top employers across all sectors can be found here.

Many people have begun to realize that Edmonton is a great place to live, and the city is continuing to become even more popular amongst young professionals living in Canada. Jobs are abundant, so living in Edmonton has the potential to be a good career move.

The city of Edmonton attracts people from all over the world. There are so many things to consider when moving to a new city, especially one as big as Edmonton, but it is definitely possible for anyone to have a fulfilling life here. In fact, 30% of the city’s residents are new Canadians. This demonstrates just how open the city is to new people, with so many different cultures and backgrounds.

In terms of population size, the city is ever-growing. By 2025 the city is estimated to reach 1.6 million people. It is currently the second-largest city in Alberta, after Calgary. As the city grows, Edmonton will continue to be a dynamic and multi-cultural capital of Canada.

As Canada’s second sunniest city just behind Calgary, Edmonton’s weather is perfect for the outdoor enthusiast. Sunshine is a daily occurrence in Edmonton and it takes a lot to spoil the great weather that exists here.

Although the sun is often out, winters in Edmonton can still get pretty cold. Nonetheless, there are plenty of winter activities to partake in to ensure that you don’t get too bored during the cold winter months. There are multiple National Parks nearby where you may ski or snowshoe, in addition to other popular winter sports.

As one of the major cities in Canada, living in Edmonton offers citizens a variety of things to do and see. In fact, Edmonton is considered the country’s Festival City, with over 50 festivals taking place in the city throughout the year. So, if you like arts and crafts, music, dance, film, or theatre, you’ll find living in Edmonton exciting.

On top of having an engaging inner city, living in Edmonton also offers people a great connection with nature. Edmonton is close to various lakes, making it a prime spot for those who love water sports. Or, you can just enjoy a sunny day in one of Edmonton’s many parks and gardens. The North Saskatchewan River Valley allows for all kinds of recreation, including hiking, kayaking, and more.

If you have kids or are looking for post-secondary education, Edmonton has plenty of great schooling options. From public to private, elementary to high school and college, living in Edmonton has a lot of benefits for students. People from across the world come to study at universities in Edmonton. The city has many advantages for students because of the wide range of schooling options available, as well as having close access to big-city amenities.

Edmonton Public Schools (EPS) is one of the most popular options for schooling around, as it is free. There are multiple elementary and high schools in Edmonton, so you can find one near your home or workplace easily. Some of the schools even specialize in certain areas, such as the arts programs at Victoria School. Regardless of what kind of school you are looking for, there is likely one in Edmonton that fits your needs.

Simply put, Edmonton is a beautiful city to live in. If you are someone who does not mind the cold or long winters, Edmonton is definitely right for you. Awesome entertainment, affordable living and a flourishing job market make Edmonton a great choice for any individual. So, is living in Edmonton right for you? If so, why wait any longer! Here is your chance to make a great city even greater.

Well, what do you think? Is moving to Edmonton right for you? We hope this article has shed some light on the situation.

If you’re moving to the Edmonton area, Sparta Movers are the movers you want to hire! We offer both local and long-distance moving services, as well as storage, packing, and more. Get a free moving quote here or contact us today!