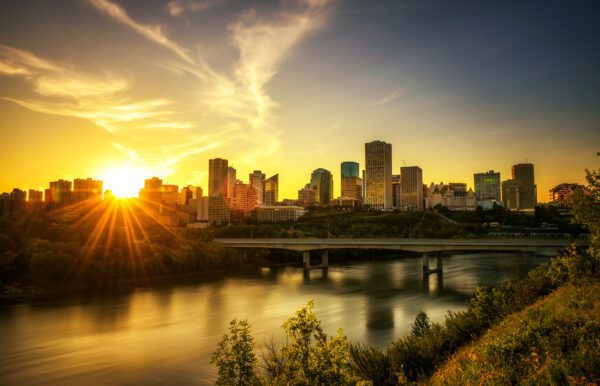 Edmonton is a beautiful Canadian city that offers a lot of opportunities for visitors and new residents. The province of Alberta has been ranked as one of the top places in North America to live, work, and invest. Edmonton is the capital city of this northern part of Canada. It’s not only a great place to live but also an excellent location from which to explore Northern Canada’s beauty year-round. This article will help you get started with moving to and living in Edmonton.

As of 2016, the population of Edmonton is 932,546. Considering the city is one of Canada’s most populated and has a large metropolitan area, it is still considered a relatively quiet and peaceful city. The metro population is expected to reach roughly 1.3 million by the year 2023 with migration from other cities in Canada and immigration from outside sources boosting growth.

The largest ethnic group in Edmonton is European followed by minority groups including Chinese, East Indian and so on. Overall, Edmonton has a diverse population with people from various backgrounds and ethnicities. The average age of people living in Edmonton is 36, while the city has a strong population of young professionals and families with children.

Cost of Living in Edmonton, AB

If you’re moving to and living in Edmonton, AB, here’s a look at the cost of living.

The average cost of living for a single individual living is about $1,200, not including rent. Living in Edmonton is very affordable compared to many other cities. For example, Edmonton is approximately 40% cheaper to live in than Toronto.

Housing costs are what will determine the cost of living most in Edmonton. The average monthly rent for a one-bedroom apartment downtown is around $1,100/month while outside the city center it’s closer to $900.

Ultimately, the cost of living in Edmonton will vary based on your personal choices and how you want to live. People of all income levels and backgrounds choose to live in Edmonton, so there’s something for everyone.

Next, you should know about the schools in Edmonton. There are a wide variety of schools that you can choose from to be part of your children’s learning journey. Some of these schools include Catholic, public, and private. The Edmonton Public School Board is one of the largest school boards in Canada. They have a good number of elementary and secondary schools with a variety of specialized programs.

Recently, there has been an influx of people moving to Edmonton and surrounding areas, which means that more students are enrolling in post-secondary institutions than ever before. Edmonton has a large list of colleges and universities, both public and private.

The University of Alberta is one of the largest in Canada with nearly 40,000 students enrolled. It offers a wide range of programs including medicine, law, education, nursing, social work, and more. Many students also choose to participate in extracurricular activities such as sports teams, the art club, and a number of academic societies.

The Northern Alberta Institute of Technology (NAIT) is a post-secondary institute that focuses on hands-on learning. NAIT offers a number of careers programs including technology, trades, and business.

To learn more about the post-secondary schools in Edmonton, check out our recent blog article.

The city of Edmonton is one of the places in Canada where the seasons are typically well defined. You can always tell what season it is by looking at the weather – you’ll know summer if, of course, it’s hot out. If it’s winter, then there will be snow on the ground.

The average daily high-temperature peaks at 26 degrees Celsius in July, and drops to an average of -10.4 °C in the winter season. Although winters are very cold, snowfall can vary greatly from year to year. In some winters there is hardly any snow, and in others, a considerable amount falls. It usually snows from November to March with January being the snowiest month.

Good news for those who hate the cold: even though Edmonton is located in a prairie region known for its harsh winters, on rare occasions chinook winds will make temperatures warm up unexpectedly. All things considered, Edmonton’s weather is quite pleasant and all the seasons can be enjoyed throughout the year.

When considering moving to and living in Edmonton there are many factors to take into consideration. Neighbourhoods are a big factor in the quality of living that you will experience.

Edmonton has a wide variety of Neighbourhoods for people to choose from. The best neighbourhoods in Edmonton vary greatly depending on the person and what they are looking for in a neighbourhood. There is something for everyone when moving to Edmonton, but some neighbourhoods stand out as vastly superior to others.

Another great reason to move to Edmonton is the number of job opportunities available. Many companies are based in Calgary, but they have offices in Edmonton as well. With so many jobs within the city centre, it makes commuting easy and accessible. From downtown, it only takes ten minutes to get to work.

The major industries in Edmonton are oil and gas, manufacturing, information technology, transportation and logistics, architecture and engineering as well as bioscience among others.

With so many job opportunities in Edmonton, it may be difficult to choose the right one to fit your needs. Based on your skills and interests, there is sure to be something perfect for you if you look in the right places.

Things to Do in Edmonton, AB

Lastly, if you’re still not convinced to move to Edmonton, consider the number of things to do in Edmonton! Here’s a list of some of the many things you can do in Edmonton:

In summary, there’s plenty of unique things to experience in Edmonton! In fact, the city is also considered Canada’s festival capital with over 50 festivals each year, including the Fringe Festival, which is one of Canada’s largest (and oldest) theatre festivals!

Thinking of moving to and living in Edmonton?

No matter what your reasons for moving to Edmonton, living in Edmonton have its share of downsides and upsides. If you’re planning on moving here, it’s important to weigh the pros and cons of living in Edmonton. The city is only growing in popularity, so it’s likely that you’ll have no trouble finding friends or housing if you do decide to settle here.

We encourage you to do all the research you can to make an informed decision. At the end of the day, only you can decide what the best move is for your life.

Are you looking for a team of reliable movers in Edmonton? Look no further! We offer an affordable moving service to help you with your big move. Contact us or click here to receive a free quote!