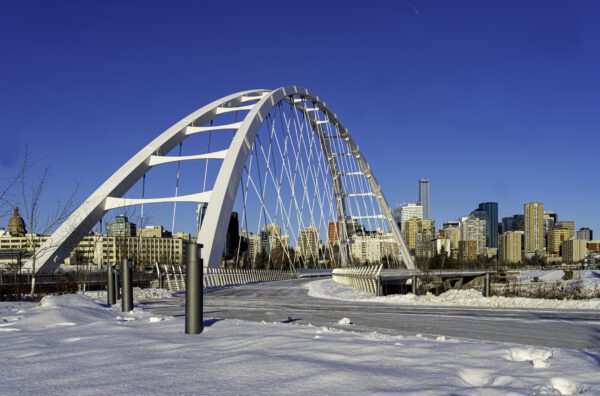 Nestled in northern Alberta, the city of Edmonton is the provincial capital and is known for its many festivals, shopping, and nightlife. In terms of climate, Edmonton’s seasons are distinct.

In this article, we’ll be exploring Edmonton’s climate and climate-related topics of interest, including the weather, UV index, and temperatures, as well as what you should wear in different seasons.

Edmonton is considered to have a prairie-steppe type climate, which means that the sun is typically shining throughout the year. Furthermore, most of Edmonton’s precipitation comes in the summer months and falls mainly in the form of rain.

Edmonton’s four seasons are broken into the following:

If you are planning a trip to Edmonton, you should check the weather forecast to ensure that you are dressing appropriately for your destination.

Due to the city’s northern location, Edmonton typically experiences colder temperatures than other cities that are located relatively close to the equator. This doesn’t mean that Edmonton is full of freezing temperatures, however. Edmonton’s climate offers many sunny days throughout the year, which makes it a popular destination for outdoor activity enthusiasts.

To get a better sense of whether or not Edmonton is right for you, check out our other article!

According to this tourism score, the best months to visit Edmonton for warmer weather are from early July to mid-August. Edmonton has a lot going on during these months, including many festivals, which makes it a popular destination for visitors.

If you’re looking for a wintery experience, Edmonton might be the place for you! Anytime during the months of December to March is great for winter activities. Just be prepared to bundle up, of course!

The warmest time of the year in Edmonton lasts 4 months, from May to September, when the average high is 18°C. July is typically the hottest month for Edmonton, with an average high of 23°C.

As you can see, Edmonton’s average temperature varies greatly throughout the year.

The city experiences rain usually from March to early November, while snow is the most common form of precipitation in Edmonton from mid November to March.

The cloudiness of Edmonton varies throughout the year. On average, Edmonton has the most clouds during the winter. In fact, the month of February has an average of 67% cloudy days.

On the other hand, the warmer months are when Edmonton is mostly clear of clouds. June through October is the clearest time of the year, with the month of August having mostly clear skies 58% of the time.

As far as when is the best time to visit Edmonton when it comes to UV levels, there really is no “best” month. Every month has relatively low levels of UV radiation compared to other cities that are located at the same latitude.

Spring Weather in Edmonton – What to Wear

During the springtime, Edmonton experiences moderate temperatures. You’ll want to wear a light-to-medium weight coat and dress in a couple of layers. With snow still on the ground and days that are filled with sunshine, Edmonton’s spring weather is a great time to explore the city’s many outdoor attractions!

Summer Weather in Edmonton – What to Wear

During the summer months, temperatures in Edmonton can reach a high of 23°C. The average low during this time period is 13°C. So, your summer wardrobe in Edmonton should include light and comfortable clothing, as well as some rain gear.

Fall Weather in Edmonton – What to Wear

Edmonton’s autumn weather is known for its cooler temperatures and bright colours. During the fall season, warmer clothing is ideal, including a jacket and a sweater. For those who are visiting during the first few weeks of fall, make sure to check the weather to ensure that you pack appropriate clothing.

Winter Weather in Edmonton – What to Wear

Considering winter temperatures in Edmonton can reach -20°C, you’ll want to dress in layers that include heavy coats, gloves, scarves and hats. There is usually some snow on the ground during the wintertime, so waterproof boots are also recommended.

What else should I know about Edmonton?

Although climate plays a big part in a city’s vibe, Edmonton’s climate is just a part of what makes the city great.

If you’re looking to move there, you may be curious to learn more about one of Canada’s fastest-growing cities. Feel free to read our other article about moving to and living in Edmonton. It covers the cost of living, things to do and the best neighbourhoods around!

Overall, Edmontonians experience four seasons every year. However, Edmonton experiences warmer or colder weather depending on the season. The climate of Edmonton is characterized by chilly winters and pleasant summers.

As one of Canada’s most popular cities and a cultural hub for the province of Alberta, Edmonton is home to many attractions. Additionally, Edmonton’s climate varies throughout the year. Understanding the weather trends will help you plan for your next trip or move to Edmonton!

Are you moving to Edmonton?

Sparta Movers are here to help! We’ve been serving Edmonton and the surrounding communities for years, and we look forward to making your move a smooth one. Call us today for a free quote, or get an online quote here!